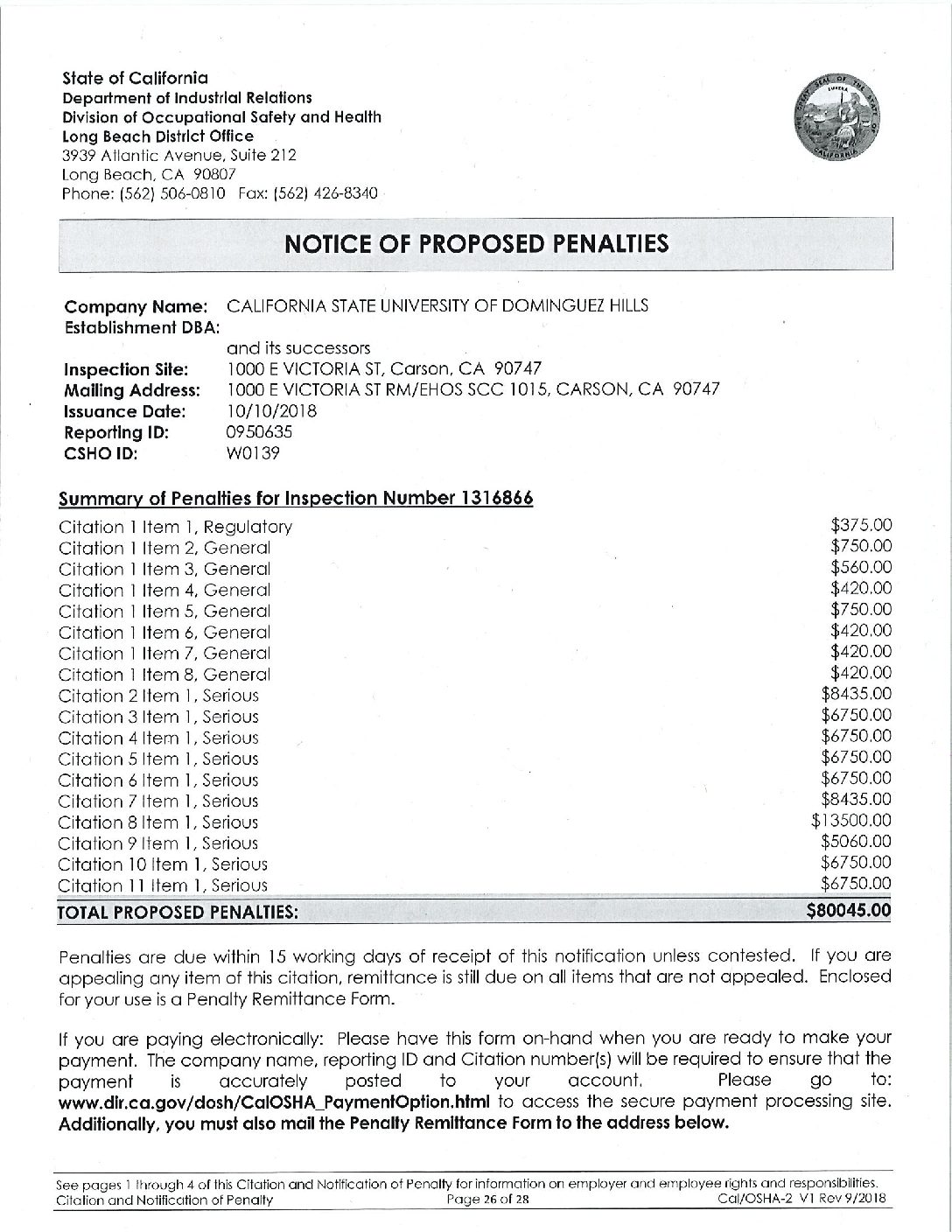 California State University, Dominguez Hills will appeal a number of the 18 citations, as well as the fines associated with them, given by a state regulatory agency involved in workplace safety,

Frank Polizzi, director of communications for Cal/OSHA, said that even though all but three of the violations were corrected during the inspection process, which began May 15 and concluded Oct. 2, the university could still be fined $80,045.

The university has the right to appeal the report within 15 days from which it was received. If it chooses to not to appeal, the fines are due in 15 days.

Naomi Goodwin, vice president of administration and finance, said the university will be appealing a number of these citations as well as the fines associated with them.

“We think that the fines are too high given the corrective action the university took immediately,” Goodwin said. “As soon as they were brought to our attention, we took action immediately, which included during the actual inspection.”

There are three specific citations related to respirators and carcinogens that don’t apply to CSUDH Goodwin said.

“We do not have situations that require people to use respirators, so in that sense, the findings are not valid,” Goodwin said. “We do not use regulated carcinogens in a manner or at an exposure level that would require that we should have reported them to Cal/OSHA and so we are going to be appealing that.”

According to Polizzi, there are two types of Cal/OSHA investigations: less serious violations, which usually involve a letter sent to the employer, in this case, CSUDH, but the investigation that occurred on campus was a serious investigation, he said, which is prompted by a complaint sent to CAL/OSHA and required on-site inspection.

The conditions that resulted in the inspection were unknown to administration before Cal/OSHA’s inspection Goodwin said.

“Unfortunately it was a result of a Cal/OSHA inspector coming to campus and then walking through the facilities with administration that we became aware of essentially all of the conditions,” Goodwin said. “There was not a condition that Philip [LaPolt, dean of natural and behavioral sciences] or I or others were aware of that we basically purposely ignored. It was a situation of not being aware.”

The investigation process found 18 violations, including 10 serious violations that, according to Cal/OSHA’s User’s Guide, means “there is a substantial probability that death or serious physical harm could result from a condition which exists—or from practices, operations or processes at the workplace.”

Goodwin said that the Cal/OSHA inspector told her on multiple occasions that there was no “imminent danger” related to the citations.

“Certainly the inspection triggered concerns on all of our parts, including staff members,” Goodwin said. “We wanted to be certain that there was not anything we needed to do responding to an imminent danger and so she on more than one occasion told us that there was no imminent danger essentially saying these are serious conditions certainly there is an increased level of risk that there could be an adverse action but it’s not imminent.”

All but three of those violations were addressed during the inspection process. One of the issues not remediated was the lack of training provided to employees on hazardous chemicals present in their work areas. This citation could cost the university $13,500.

According to the Citation and Notification of Penalty, a citation that was remediated during the inspection was the failure of CSUDH to “implement and maintain an effective injury and illness prevention program.” Although this was fixed during the inspection, the university could still have to pay a fine of $8,435.

Even with the appeal, the university will probably still have to pay some sort of fine, Goodwin said.

“It will have to come from our operating fund, essentially, the university resources that we use to operate the campus so that will mean that we will not be able to allocate that money for something else, of course, so that’s partially why we are hoping that we can get the funds to be reduced so that it will be as small as possible,” Goodwin said. “I think we have a really good case in that regard. We took such immediate action and those actions that we did take we’ve already spent money to correct the conditions so we believe that Cal/OSHA will be receptive of that.”

The university will also be implementing changes to prevent something like this from happening in the future. One big step is hiring a chemical hygiene officer Goodwin said.

“That’s someone who reports through the division of administration and finance, but who is physically in the labs on a daily basis working with the lab technicians working with the dean, the associate dean, and the faculty to really see what’s happening,” Goodwin said. “[It’s someone] who has a high level of expertise in chemical and safety management and who is providing them with training and doing inspections when conditions aren’t corrected and then would report up through the hierarchy of administration to make sure that any issues are brought to the attention and dealt with.”

Philip LaPolt, dean of the College of Natural Behavioral Sciences, stressed the importance of this new chemical hygiene officer.

“The chemical safety officer is really important because it is no longer our perception of what is safe,” said LaPolt. “It’s the expert’s perception and actual knowledge of what is safe. He has great expertise in terms of Cal/OSHA and other standards. So with that guidance and with increased communication of everyone who has that shared responsibility, we’re really confident that going forward we’re never going to have this happen again.”

This story is still developing. Check our website for updates.

Space Talk: Question Isn’t Whether Student Success Hub Will Be Overhauled, but When?

The Doctor is In