Honoring Two of the Best, and Most Overlooked

ompared to our other sports teams, the men’s golf team doesn’t get a lot of attention. There are several reasons. The team’s matches are almost always played far away, they don’t practice on or near campus, and unless one follows or plays golf, it can be a difficult thing to understand, and from a journalist’s perspective, to write about.

But that shouldn’t minimize the dedication and hard work that goes into playing golf at the university level, and that’s why during halftime of the Feb. 21 women’s basketball game against Humboldt State, two four-year seniors on the team were : Andrew Banuelos and William Yang.

Both players rank among the best all-time Toro golfers.  Banuelos’ career scoring record of 74.90 over the 72 rounds he has played at CSUDH is the lowest in Toro history, and he holds three of the top-four single-season low averages, his best year is this one, in which he is averaging 73.6 strokes per round. Only Andrew Fernandes, who shot 71.3 in 12 rounds in 2016-17, tops Banuelos’ marks.

Yang has the third lowest career average for a Toro, averaging 77.14 over 76 74 rounds, and the fifth and sixth lowest single-season scoring averages

Their efforts were recognized by head coach Ron Eastman, who gave them each their own golf putters and framed portraits of the 2018-19 team.

Banuelos, who has also posted the most career top-10 finishes of any Toro golfer, eight, and who tied his lowest round score of 68 this season, said that although he feels golf is sometimes overlooked at CSUDH, he has no regrets about wearing the cardinal and gold for four years.

“Sometimes I feel like as a team we aren’t even acknowledged or recognized,” said Banuelos, whose hometown is Pico Rivera and who played for El Rancho High School. “[But] golf has always been something that I have enjoyed doing. After graduation, my goal is to get into golf professionally. It is a career path that I’ve always wanted to be in.”

Yang, whose career best was a 66 as a junior, agreed that his time at CSUDH has helped him pursue his passion.

“I have no regrets playing golf,” said Yang, who is from Chino and went to Diamond Bar High School.  “It has opened doors to some big opportunities for me. I was chosen to play golf professionally in China soon after graduation.”

As evidence of the commitment CSUDH’s golfers have to the program, which started in 1969 when John Johnston competed in the first college tournament for the university, is the of frequent freeway miles they have accumulated. Though they attend classes in Carson, they drive some 20 miles (which can feel easily twice as long in LA’s wonderful traffic), to Whittier just to practice in California Country Club.

“It does take a while to get to our golf course, but it is all about a quality course to play on,” said Eastman, now in his sixth season as Toro golf coach. “There are certain golf courses that don’t have the same type of design, which is another factor that comes to play.”

With its weather and array of top-flight golf courses, Southern California ranks among the top golfing markets in the world, so competition at the university level is fierce. But while the Toros have never collectively won a tournament the four years Banuelos and Yang have played (their best finish was second in a 13-team field at the February Coyote Classic hosted by Cal State Bernardino) their goal of winning CSUDH’s first-ever NCAA title remains undeterred, and they hope it will be continued by returning and future Toro players.

“Our goal is to win a championship banner that will be hung up in the school gym to preserve our legacy and provide school recognition,” said Yang.

The men’s golf team has two more tournaments this season, March 11-12 in Livermore, California, and April 1-2 in Turlock, before the California Collegiate Athletics Championship, April 21-22, near Monterey. 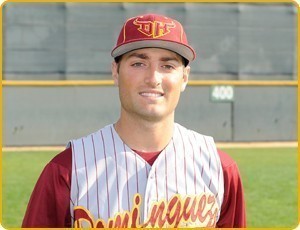