California State University, Dominguez Hills  President Thomas A. Parham is among those who believe that a crisis doesn’t build character; it reveals character.

“If you want to see character on display, look at (someone) in the middle of a crisis,” Parham told the Bulletin last week.

Parham was alluding to how the campus community has reacted in the past 15 months. That reaction, the vulnerabilities it has exposed and the opportunities it has created, was the through-line of that hour-long interview, even if the primary focus was Parhams’ thoughts on the April 22 announcement. The  California State University system will, pending full authorization of a vaccine by the Food and Drug Administration,  require all students and faculty to be vaccinated before returning to campus for the fall 2021 semester.

But coming at the end of the third consecutive semester upended by the pandemic, and heading into a still uncertain but far less foreboding fall semester, Parham seemed less interested in merely responding to a series of questions than engaging in a thoughtful conversation about the vulnerabilities that this pandemic has exposed at CSUDH. More importantly, Parham stressed how determined he and his administration are to use those weaknesses, whenever possible, as opportunities. Not to return to pre-pandemic times, but to transform into a healthier, and more prosperous institution.

“I’m not interested in recovery because recovery assumes that what you are recovering back to was normal and healthy in the first place…I don’t want to recover, I want to transform the institution so that when we come back we’re in a place where we could’ve been all along, a better place.”

Even the topic of vaccinations reveals an aspect of CSUDH’s character in that it both exposed a serious vulnerability of the campus, and also one that can be turned into an advantage. The university’s location in  Los Angeles County, one of the hardest hit regions in the country by the virus, and the fact that the vast majority of CSUDH students must work or live with those that do, meant that we were more exposed than other CSUs when the COVID-19 pandemic hit.

“It exposed a population of principally Black and brown and Asian folks and poor white folks,” Parham said. “And others who were vulnerable to the health pandemic and disease because of family circumstances, etc or where they were from.”

“As the virus exposed how much at risk the CSUDH community was in terms of contracting the virus,” Parham said that heightened exposure makes the need to be vaccinated even greater for CSUDH students, meaning a safer return for all next semester and beyond.”

That is one of the reasons why Parham is an enthusiastic supporter of the Chancellor’s proposal. Parham said all 23 campus presidents were consulted about the possible vaccine requirement. He was among those who support the mandate for on-campus classes.

“I was one of those who argued that I would mandate it and I was delighted to see our Chancellor step out in a pretty bold move… to say ‘Yes we are going to mandate vaccines!’

Although the date of when the FDA could formally approve the vaccine(s) remains unknown, to Parham receiving the vaccination can also be a major step in getting the campus community closer to a safer return to campus.

Despite his support, Parham said he is aware that not everyone shares his enthusiasm about vaccinations.

“In a society that prides itself in individual rights and individual freedom, it is always true that individual freedom is always paramount to the degree contingent upon that it does not disrupt the rights of other people,” he said. “Despite my embracing of individual freedoms, I want to be able to embrace the notion of a collective survival that if we can encourage people to take the vaccine and they are deemed safe then we will be able to move into a society where we have a broader level of herd immunity”

In terms of how the university plans to verify staff, faculty and students who return to campus are actually fully vaccinated, Parham said these things are not fully determined just yet, and that these details are “fine prints.” The university administration will be brainstorming, as many of these next steps depend on federal, state and local guidelines.

Another factor in mandating vaccines are those who may seek an exception. According to the CSU announcement, “the COVID-19 vaccination requirement would allow for students or employees to seek an exemption based on medical or religious grounds. The policy and related implementation details are under development and will be made available once the consultations have concluded.”

Virtual and in-person classes next semester

One thing Parham knows is the nature of classes, come this fall. In June, once the final decision of what fall class will be on campus and which will continue virtually, Parham wants students to be aware that the vaccination requirement does not open a door for preference around how they wish to take their classes. Meaning, that if students are enrolled in a class that is in-person, or virtual, they cannot choose to do otherwise, unless they have a medical condition or some other factors that preclude them from taking face-to-face classes. The reason for this is to be able to give students the best education possible, which to him is a “face-to-face enterprise.”

“It is not a matter of convenience for folks being able to stay home if they want,” Parham said. “It is about what we believe is the best educational interest.”

Other topics in the interview included:

State Budget –  CSUDH was able to endure last semester’s budget deficit, which cut approximately $7.5 million from the campus budget, which accounts for the university’s share of the total $299 CSU deficit.

Even after this huge budget cut, the university was able to stay aways from layoffs.

“We (didn’t) have to lay off not one person, I took a big risk not doing and making sure we had to move things around to not be able to do that, those were people’s lives,” Parham said.

Technological sophistication– Parham reflected on how the pandemic revealed that as a campus community, CSUDH did not have the adequate technological services to transition online.

“It assumed everyone at the campus had a computer, and not everyone did, same went for Wi-Fi,” he said.

Parham expressed his gratitude for how fast and willing faculty members were to transition and  “upscale” their technological sophistication to be able to continue teaching the content needed.

He also praised the campus affinity centers for continuing to engage students and build relationships with them in an online environment.

“We use the crisis as an opportunity to connect with folks in a more authentic way,” he said.

Campus Building and Infrastructure – While most of the campus has been closed for 15 months, Parham and his administration saw that unexpected downtime as an opportunity to accelerate construction on the Innovation and Instruction building, which will be opening its doors to students in the upcoming fall.  Another addition to the campus library is a new Esports Lab that is set to complete construction this summer.

The new Esports Lab addition is also on track to complete in the summer.

“I want to remind people that Esports is not just about gaming,” Parham said. “Gaming is a strategy, not an outcome.”

According to Parham, by becoming interested in gaming, students learn coding, how to write, geometric and algebraic formulas and much more.

While approval of a vaccine, who would be exempt from receiving one, and the number of in-person classes next semester undecided. Parham said that considering what this campus, and the people who give it life have gone through in the last year, he is “eternally optimistic.”

Parham added, that to him, “there is no greater blessing in life, next to being a parent, than being trusted with the personal and intellectual growth and development of [students].” 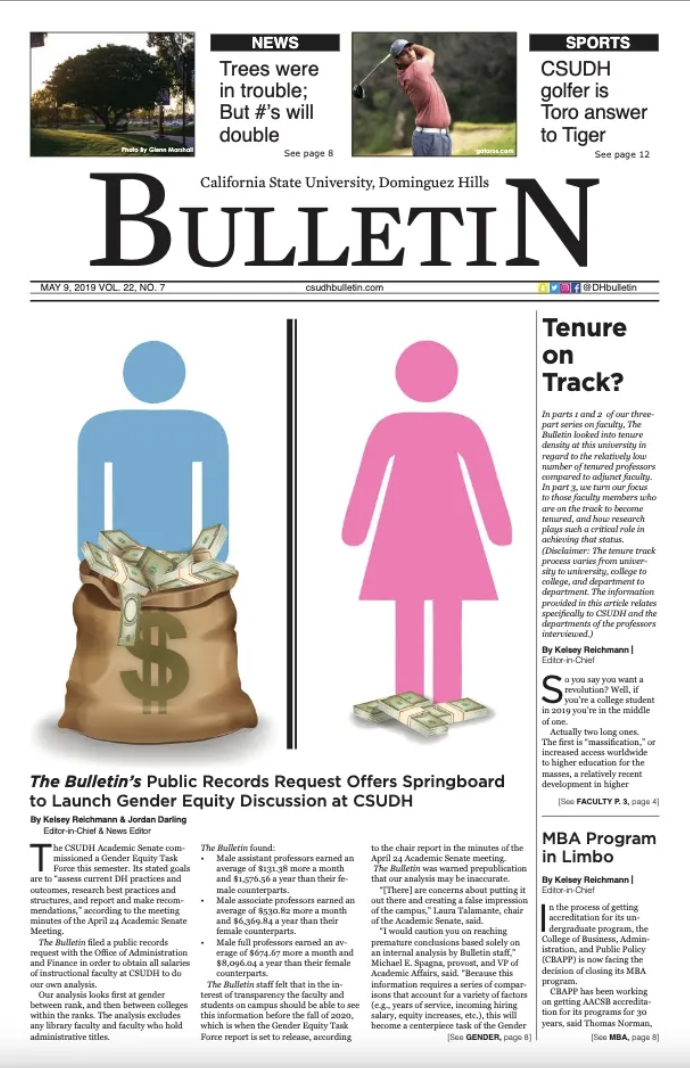